Offering Wi-Fi for customers is a great way to attract more clients, but it's also a way to attract attackers. Attackers use Wi-Fi hotspots for phishing, sending users malware, and performing illegal activities. Wi-Fi hotspots are the most vulnerable to open attacks because anyone can join the network as long as the password is known. Anyone responsible for securing a public Wi-Fi hotspot should consider web content filtering. Web content filtering stops many of the attacks that could affect the integrity and safety of your Wi-Fi network.

Web filters were introduced where network administrators could use a database of categorized domain names to block users from accessing prohibited content. This method worked well, but it was plagued with false positives and false negatives.

A better way of web filtering is stopping content before it's downloaded to the network. DNS-layer filtering stops content from being access during the DNS lookup process. Every application that uses friendly URLs to contact servers uses a DNS lookup. DNS is an integral part of Internet communication, so it's a seamless way to block unwanted content downloads on a Wi-Fi hotspot.

Instead of downloading the content and filtering after it has reached the Wi-Fi network, DNS-layer web filtering performs a lookup as the application uses a name server to match the domain with a server IP address. By blocking content at this stage of the communication process, network administrators not only protect from common web attacks but they also reduce costs on bandwidth usage and speed up performance for customers.

Web content filtering protects the network in several ways. This cyber security method also gives administrators the ability to track network usage and break it down into sections that allow specific users to access content where others can't. For instance, you might have a wireless hotspot for vendors that need access to specific content that the general public should not have access to. Some businesses have several Wi-Fi hotspots for different types of web traffic, and web filtering can allow only traffic that's useful for each user group.

By blocking IP addresses on a Wi-Fi network, an administrator can stop malware from being downloaded to the network. Not every malware download is from an attacker. Some users fall for phishing attacks or navigate to a site that hosts malware. These users innocently download malware to install on their PC. If this malware is designed to scan a network and find vulnerable routers, laptops or servers, your Wi-Fi hotspot could be a risk for users that connect. Since an administrator can't control an anonymous user's computer, any number of viruses, worms, rootkits or ransomware could be a threat to dozens of other users using the Wi-Fi hotspot.

Attackers use public Wi-Fi to download malware to purposely infect a hotspot, but another reason to use Wi-Fi anonymously is for illegal purposes. Not every malicious user is a hacker. Some want to use your Wi-Fi hotspot for illegal activity. With web content filtering, an administrator can protect a network from being used for illegal activity. It can also be used to block distasteful content that could take up bandwidth.

Any illegal activity could put the Wi-Fi hotspot owner at risk for liabilities. By allowing illegal content downloads, the owner could be investigated and asked for logs and video from law enforcement. Being a part of an investigation even if it's just for your Wi-Fi logs is a hassle for any organization and its network administrators.

The final benefit of using web content filtering is Wi-Fi bandwidth performance. When administrators cut down on unneeded data transfers, they free up bandwidth for legitimate web traffic. With videos and media common on the Internet, removing unnecessary content traffic will have a boost for users that stream media using Wi-Fi.

It's not uncommon for administrators to ignore the risks of public Wi-Fi since it's segmented from the internal network. This mistake increases costs for bandwidth, slow down network communication for legitimate users, and could be a source of an attack with malware. 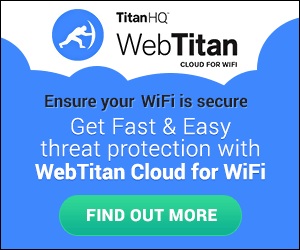