Chromebook Content Filtering for K12 Schools and Why it’s Essential

According to Google, in 2019 there were more than 40 million Chromebooks in use in education worldwide.  The accelerated use of these devices for K12 students is nothing short of phenomenal.  Their prevalent use in K12 is driven by several key attributes of the popular tablet.

School districts around the world over are issuing Chromebooks to their students to help close equity, technology and homework gaps that are all too present today in many districts.  While there are lots of good reasons to implement a Chromebook 1:1 program, but it’s also good to remember that a Chromebook in the end is only a tool.  It’s a tool that children can use in a variety of ways, not all of them productive.

While a Chromebook is technically a computing device, its primary purpose is to give the user access to something on the internet.  That something could be an educational application or a game app.  It could be website hosting research information or inappropriate or offensive content.  Just being on the internet with an assigned device isn’t a recipe for success.  Context and content matter.  Enforcing borders is important when it comes to children.  Without them, students will stay connected to game sites and seek out forbidden content.  According to two studies conducted in 2017, the National Assessment of Educational Progress and the Program for International Student Assessment, test scores went up for students that used the internet for a low or moderate amount.  However, test scores dramatically dropped for students that spent six or more hours a day on the internet.  At some point, a ceiling came into play in which more internet didn’t translate into better academic performance.   In fact, the opposite occurred.  While it would be nice to think that students were spending six hours on their studies, it most likely isn’t the case.  The internet can serve as a distractor as well as a teacher.

And then of course there is the issue of CIPA compliance for K12 institutions that depend on e-rate funding.  CIPA requires districts to have an internet safety policy that blocks and filters images and content that is deemed harmful to minors.  Secure borders are a necessity for school districts that implement Chromebooks on any scale.

Chromebooks are no different in one respect to other types of computer devices.  They are vulnerable to malicious code.  While it is true that traditional .exe files can’t run on a Chromebook, the devices are susceptible to Android malware and other threats like any digital device.  Because Chromebooks are designed as a web enabled device, the internet is the primary attack avenue for malware and other types of malicious code.  While content filtering is a big part of ensuring a safe internet experience, security is job one today, which is why next generation internet filtering plays a critical role in any multi-level cybersecurity strategy.  Whatever filtering solution you use, it must be able to block the infiltration of malicious apps and code.

In order to meet the demand for content filtering and security protection, TitanHQ has now released WebTitan on-the go for Chromebooks.  The same level of excellence that Windows admins have grown accustomed to when delivering user and device-level web filtering for their system’s Windows 10 devices is now available and customized for Chromebooks as well.

In the same way that districts are attracted to Chromebooks for their ease of use, many WebTitan customers are drawn to the simplicity of the WebTitan Cloud management interface.  Its web based intuitive design makes it easy to master in no time.  Small and rural districts appreciate the fact that WebTitan doesn’t require a learning curve in order to master it.

WebTitan is Designed for Anywhere Learning

We all learned a lot of lessons in 2020.  We found that a large percentage of employees can work essentially anywhere.  We also saw that those school systems that were prepared for virtual learning could teach students remotley as well.  WebTitan is designed for the “Anywhere Workforce” as well as “Anywhere Learning.”  Whether your students are operating their devices on campus within a traditional classroom or at a remote location in the comfort of their home, they and their devices are protected by the same granular internet filtering policies.  With WebTitan, parents will have the assurance that their children are accessing the internet in a safe and trusting manner and having the support of parents is essential for any 1:1 program to succeed.

When we say that WebTitan is designed for “Anywhere learning” we aren’t just talking about the filtering policy itself.  Our cloud based solution gives internal IT the ability to fully manage your web filtering system from anywhere in the world, giving your admins the same tools and interface regardless of there they are working from.  We also know that the process of onboarding thousands of students with their Chromebooks is no easy feat.  That’s why we deemed it essential that WebTitan not further complicate the onboarding process.  Rather than relying on-premise or user client software, WebTitan simply redirects the DNS traffic of all of your devices.  Everything takes place in the cloud, giving you total redundancy as well.  WebTitan was one of the first companies to offer a total cloud based filtering solution.  Because there is no inline device, you don’t have to worry about intranet traffic being blocked or non HTTP/HTTPS traffic.

You can’t filter K12 students with a broad brush.  You may need to open a game site for early elementary aged students who may need access to online math and reading games, but totally block it for middle and high school.  Your administration may think that YouTube is totally inappropriate for elementary aged children, but offer middle and high school students’ limited access to it.  While many schools opt to block social media sites from students, school principles, parent liaison coordinators and other personnel need access in order to post news and events on social media.  Internal IT needs wide open access to technology sites, while students and staff need to be prevented from downloading tools and applications they shouldn’t be involved with.

When it comes down to it, there is probably no institution more difficult to filter for than K12.  WebTitan on-the-go for Chromebooks is designed to accommodate the most complex of environments using a simple 3-step process.

You can also override your policies with manually created exceptions.  With WebTitan, administrators and parents can know that every student is being allotted their appropriate internet access.

At some point, a concerned teacher or parent is going to issue a request to know what sites one of their students or children has been accessing.  The extensive reporting feature of WebTitan can query relevant information concerning a student’s internet history and summarize it into an easy to read report.  Administrators and IT personnel can also discover broad based behavior patterns concerning student internet usage at the system and group level.

Of course content filtering and reporting don’t matter if your district is taken down by a malicious malware strain that someone downloaded over the internet. WebTitan’s malicious detection service constantly monitors and identifies malicious threats in real time with the aid of AI-powered protection that can combat emerging phishing URLs and even zero-minute threats.  As WebTitan has been protecting computer devices for years that are deemed far more attack prone, you can be sure that WebTitan can secure the internet experience of your Chromebook users.

WebTitan may be new to Chromebooks, but we aren’t new to school internet filtering and security.  All we’ve done is take our highly successful web filtering architecture and interfaced it with Chromebooks.  While we cater to many businesses and managed service providers, we are also heavily partnered with K12 institutions across the globe.  Let us show you how we can enforce borders and security, while wrapping it all into a simple package for you to manage. 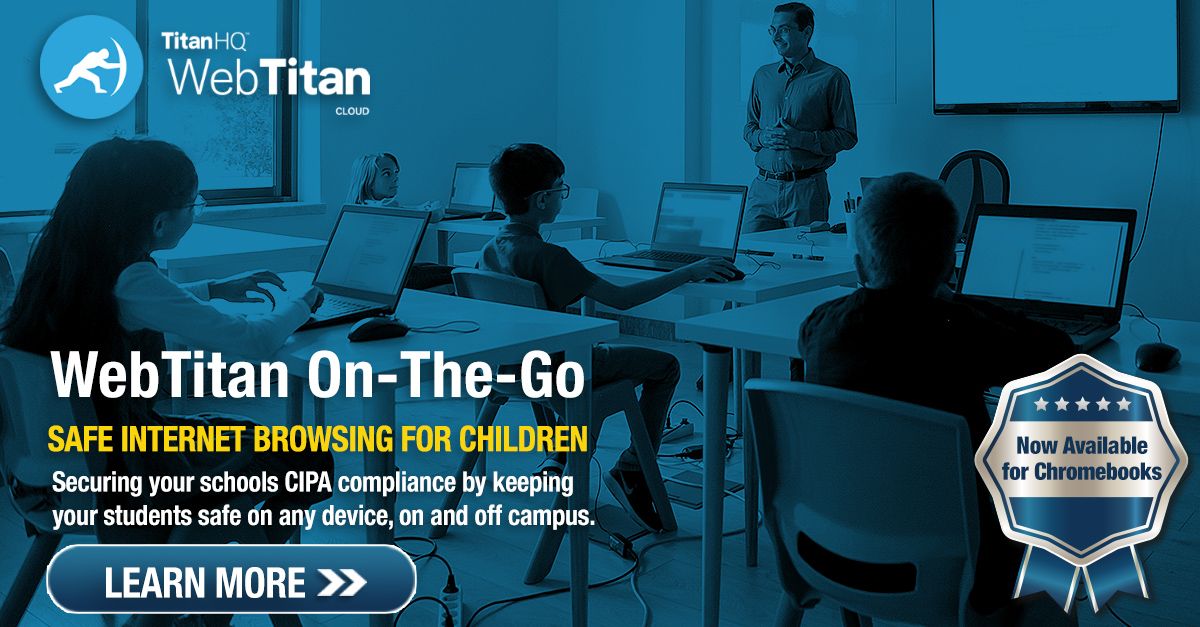